We were delighted to add our magic to the new, exciting themed restaurant and bar at the ‘Hive’ Yorkshire Wildlife Park as it continues to expand its attractions.

‘Evolution’ is an adventurous dining experience featuring two different ‘lands’ to dine in and a spectacular bar created as a full sized shipwreck which represents a fit out of over £1m to create a unique mixed media environment.

The restaurant is themed around The Beagle, Charles Darwin’s trusty ship that took him on incredible journeys to chart the origins of species, and it forms the centrepiece of Evolution. The story is based on what might have happened had the HMS Beagle landed on an island inhabited by animals of ages gone by.

Technically Creative worked alongside Cod Steaks to create this magical restaurant backdrop with jungle ferns, ancient statues and a deserted temple. Our audio visual atmospherics, animated projections and special effects were created to enhance the landscape and create an immersive mixed media experience to entertain guests. Animatronic dinosaurs, moving Easter Island statues and fire breathing dragons create a unique dining experience. On Friday and Saturday nights, as well as school holidays, the experience will be further enhanced at Evolution Live! with actors playing the crew on the central stage of the ‘Beagle galleon’. 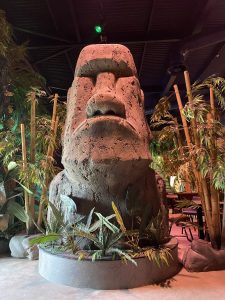 “Evolution is a magical place that will amaze and delight everyone, and we can’t wait to share it with our visitors,” said John Minion, CEO of the park at Auckley near Doncaster. “We wanted to create something special that reflects that was exciting and relevant to the natural world and something that has simply not been seen before. This is the feature restaurant in the Yorkshire Hive which is the free to enter leisure destination before the entrance of Yorkshire Wildlife Park.”

Evolution will provide a full, exciting food and drinks menu to go with its themed areas which include a Jurassic Jungle area complete with dinosaurs and the Magical Caves of the Lost Kingdom where dragons live.

“Diners will experience a different story depending on the themed area that they are going to dine in. In the future this will allow us to change and update the story as the Beagle visits more places,” said Mark Pyrah, Development Director at Cod Steaks, the award-winning Bristol-based creative design and build team. “A mixed media development of this scale in a restaurant has not been seen in the UK and we are proud to have brought this special place to reality’, working with Technically Creative.

Yorkshire Wildlife Park is an international force for conservation and is welcoming new species and animals during the year as it expands its unique offering to visitors. The 150-acre park, which has 5km of pathways for safe viewing of over 450 animals, many of which are rare and endangered, has expanded with the most recently opened Atlantic Forest reserve covering 1.36 acres with maned wolf, lowland tapir and bush dogs.

Learn more about the restaurant on the official website.

Introducing our collaboration with Safety Central!

Our project with the Rampion Visitors Centre

Time to Bring the Technically Creative Magic to You!